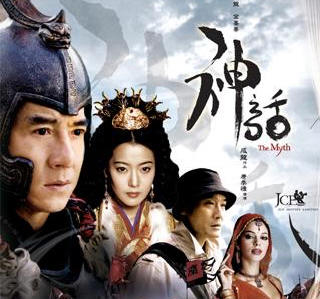 Support the Site by Buying from YesAsia

Chan is Myth, but not the movie...
Jackie Chan is not just a household name or a big star, but in many people eyes, he is simply – The Myth. In his latest action blockbuster, Chan returns to his homeland once again to show what he is ultimately made of and perhaps yet another attempt to become a serious actor. After his overrated performance in - New Police Story, yet to be perfectly honest, his acting was pretty crap in it and to say he is a dramatic actor; it would definitely be more like a joke. However, his performances in the Myth, perhaps bring out a new look Jackie Chan and some definite potential of becoming a somewhat serious dramatic actor. The Myth isn’t a brilliant movie, nor is it the best action around, but it is what I call a pretty adequate movie, that kind of just lack that extra ingredient – emotions and plot.

Perhaps the main reason why I am giving this movie some marks is because of the fact that it is somewhat about the First Emperor of China – Qin dynasty. The Qin is my favourite topic in Ancient Chinese history and in fact, I even did an extensive research essay on the First Emperor of China for my major work just a little over a year ago. While The Myth isn’t really about Qin, but it uses it as a backdrop and does so in a manner of a beautiful painting and mixing it with acrobatic action display. Ancient History, writing and movies are my three utmost passions, and in reviewing a movie that has something to do with ancient history, will make me a bias reviewer. That’s not to say that I will just praise anything that is within this genre, as I panned Alexander to the max. However, The Myth isn’t really about history, nor is it about action, but rather about love – a forbidden love between a warrior and a princess. Planning for a fairytale? Not really…

The movie goes like this: Intrepid archeologist Jack (Jackie Chan) and ambitious scientist William (Tony Leung Ka-Fai) set out on an adventure that would lead them to the greatest discovery in Chinese history. Their journey starts at Dasar, India, where they stumble upon an ancient sword from the Qin Dynasty and a magical gemstone that appears to be able to defy the force of gravity. The booty not only leads them to the mythical mausoleum, but it also connects Jack to his dark past life. Through strange and provocative dreams, Jack sees himself reincarnated as Meng Yi, a general who fell for the First Emperor’s beautiful consort OK Soo (Kim Hee-Sun) some two thousand years ago.

For every Jackie Chan’s movie, one must always comment on the action, and to be honest, it isn’t anything special, but some stunts are pretty well done - especially the opening action sequence of the carriage, hanging over the cliff that was a classic. However, an aspect of this movie that really fails must be the somewhat muddled up characters that just seemed to appear here and there. This is extremely evident in the appearance of the Indian chick, which is not only unnecessary, but almost making next to no sense. Likewise other bad guys are woefully underdeveloped, whilst making them just seemingly out of place and odd. Another failure, must be once again, Jackie not using his female lead to full potential as here, Kim who is a brilliant actress on her own, is given an almost flower glass role and is immensely underdeveloped.

On the plus side, there is my granddad look-alike – Tony Leung Ka Fai, who plays Jackie’s sidekick character better than what was on script. His character is also suffers from being underdeveloped, but Leung knows his stuff and almost manage to cheat the audience with yet another sleep walking performance. As to the acting of the man – Jackie Chan, he has improved a lot and in what can be call as his less comical role; this one showed some glimpse of what Jackie really want to become – Robert DeNiro. Surely this is by far Jackie most matured performance, but to compare it with DeNiro is like comparing a stone with water. Sure Jackie may be a comedian, but in emotional scenes, he just can’t quite pull it off and the results really can clearly be seen. In what may well be an outright emotional ending, instead it is spoiled by Jackie’s awkward reaction as Kim begins to fly away from him. That is clearly a sign of crap acting and possibility the worst ever reaction I have ever seen in a tragic dramatic movie.

In a way, to be perfectly honest, this review may seem all over the place and perhaps even lingering upon a rather negative mindset. It may well be deal to my own frustration at the moment: pursuing a dream is hard, you may think that letting go is easier, but it is actually the other way around. Perhaps it is the reason why I haven’t written much reviews this month, but I realize that letting go of a dream is a million times harder. For that I apologise, but really the state of HK cinema isn’t really that bright. Actually I should get back to reviewing and stop my whining…

The Myth isn’t the best example of what Chan is capable of, and it is even weird at times, but somehow it just kind of works. Maybe, it is the historical backdrop, or may be it is Kim’s beauty or the fact that I have taken a bit of a break from HK cinema, but whatever it is, The Myth is a very adequate movie, nothing spectacular and nothing boring about it. Chan isn’t back to his best, nor does he press his claims on Robert DeNiro, but nor does he disappoints. As far as martial arts HK cinema is concerned, this is not bad at all, but really Chan; please give your female leads more stuff to do. Aside from that The Myth is what I call a pretty adequate movie that is both weird and different.

Comment on this movie on HK Neo Reviews Forum